This write-up deals with a crackme challenge based on KVM presented at CSAW’18 CTF Qualification. KVM (for Kernel-based Virtual Machine) is a full virtualization solution for Linux x86 hardware containing virtualization extensions (Intel VT or AMD-V).

The program runs a code in a virtual machine created with KVM which check the user input. The password is compressed with the Huffman coding.

You can find the associated file here : kvm. Because of the binary name, we would expect some code related with KVM. The first operation of binary is to open the device /dev/kvm.

To control specific device operations, the program uses the ioctl system call (DeviceIoControl is the equivalent on Windows).

After binary pass the file descriptor as argument of the ioctl system call. 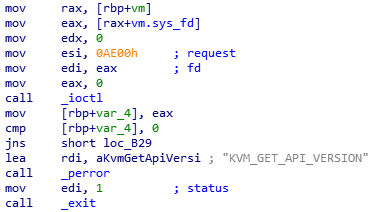 The operation associated with request code is 0x0000AE00 can be retrieved in kvm.h.

A request code is composed of

To sum up this piece of code retrieves the kvm version.

I look for the string “KVM_GET_API_VERSION” on google to find a minimal example of kvm usage in C. The following link https://github.com/dpw/kvm-hello-world contains code to run hello world program with KVM.

I retrieved key functions (vm_init,vcpu_init,run_protected_mode) from the hello world program.

I imported some useful structures, which will be useful for the future, in IDA .

vcpu structure represents a virtual cpu of the virtual machine:

Now we will search which piece of code is virtualized. 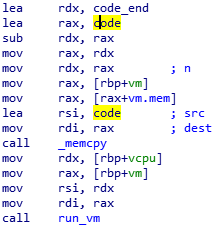 code and code_end label are located at 0x202174 and 0x20348C respectively. We can easily extract code with python and disassemble it with IDA.

The payload begins with a call to a unknown function. We can guess from the arguments that this function is a read(unsigned char* buffer,int size)

If we look inside it, we can see that program uses the instruction in al,dx. IN copies the value from the I/O port specified by the second operand (dx) to the destination operand (al). I/O port is used to communicate with devices associated with the processor. Port 0xE9 is often used by some emulators to directly send text to the hosts console. 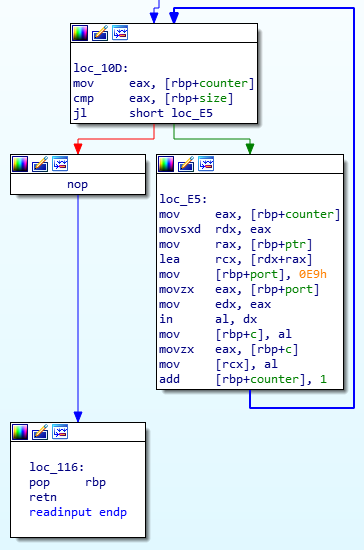 Then it checks the direction (input or output) of the I/O operation.

Then the program passes each character to a mysterious function. If the function returns FALSE (0) then the programm display “Wrong!” and exit. 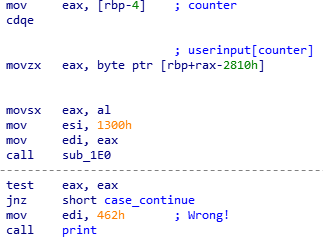 The function takes another arguments which seems to be a pointer to a binary tree.

The first element is the node value and it is followed by two pointers for:

I wrote a simple python script to convert the binary tree in graphivz format and this is the partial result. When the node is a leaf the script display the value of the node after the address. 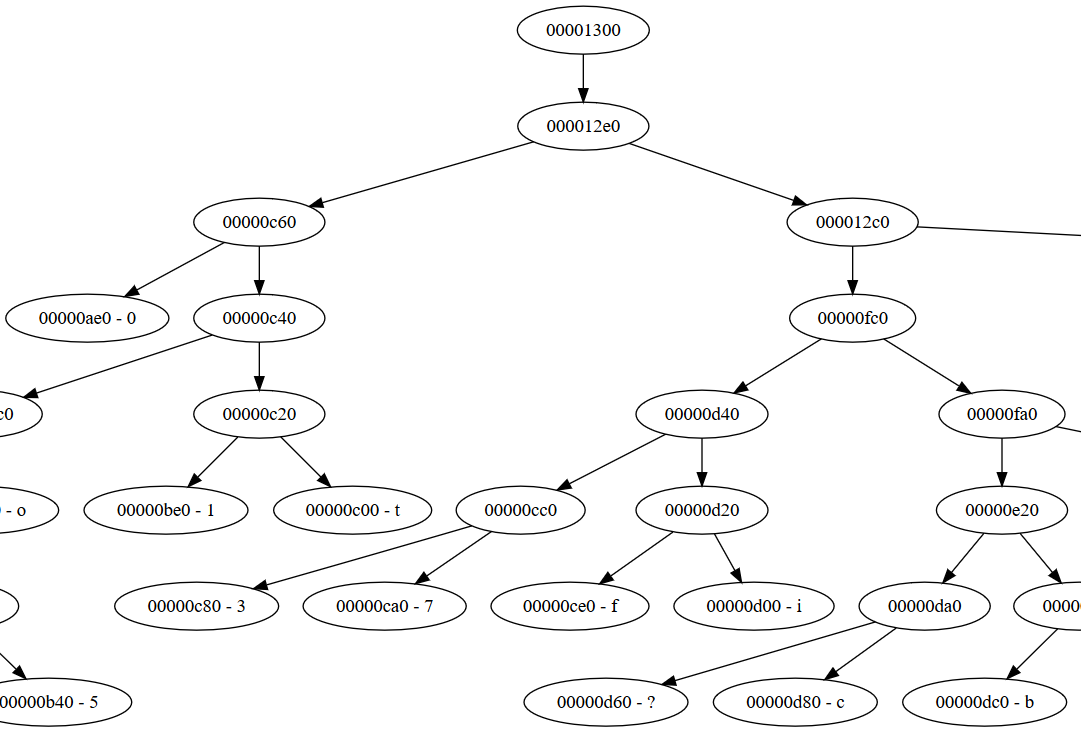 We have all the keys to discover what the function does, but the code seems obfuscated. As you can see there is a hlt instruction which stops the CPU. So the exit_reason member of kvm_run structure takes the value KVM_EXIT_HLT. 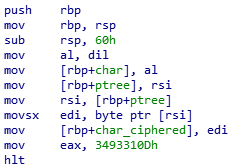 The program handles this case, it calls ioctl with 0x8090AE81 (KVM_GET_REGS) as request code to get all registers values of the virtual CPU. The structure which represents cpu registers is of type kvm_regs. 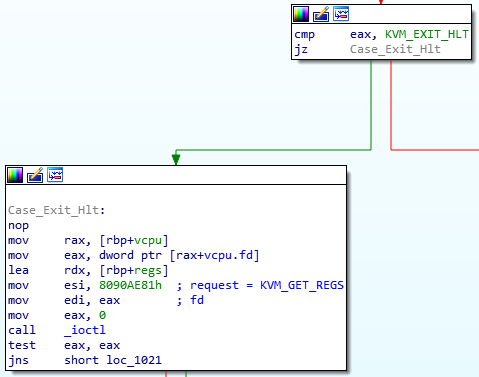 The value of EAX register is passed to a function which return a new RIP for the virtual CPU.

In the following piece of code you can see that the program use eax after custom_kvm_jump call to set the RIP member in the kvm_regs structure. Then the program call ioctl with 0x4090AE82 (KVM_SET_REGS) as request code to set new register’ values for the virtual CPU. 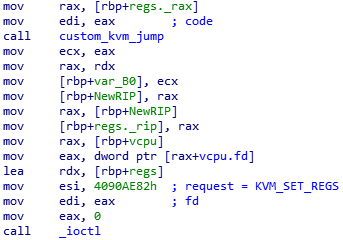 If we look inside the function, the code search the RIP value in a table which contains 13 (TableSize) structure that I called jmp_t. It allows to associate a id (for example 0x3493310D) with a RIP value. 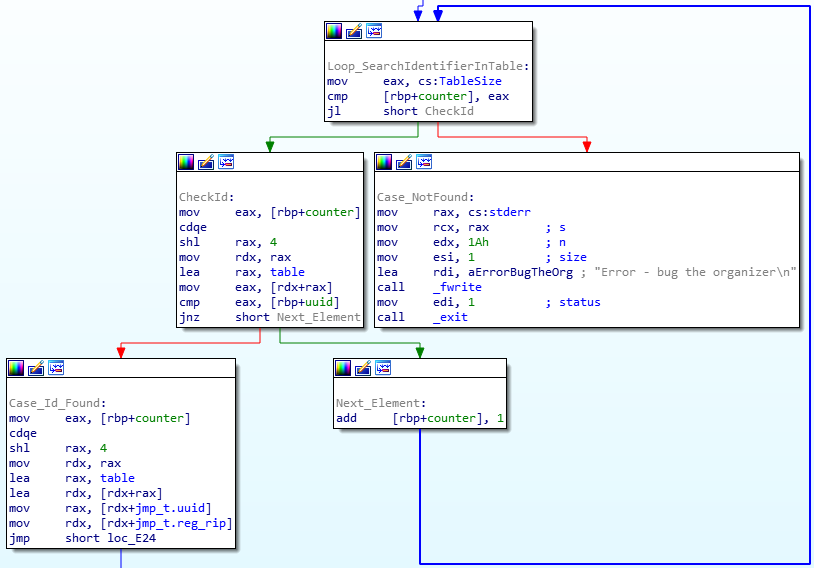 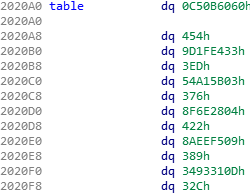 So the cpu jump at address 0x32C. Then I desobfuscated all code and I translated the assembly code into corresponding C code. I realised that this C code is an implementation of the Huffman coding algorithm.

To sum up the binary compress the user input using Huffman coding and store the result at 0x1300. But where is the comparison ?

I found a function which takes three parameters the compressed input, some bytes, and a size. It looks like a memcmp. If memcmp return 0 (equal case) the binary print ‘Correct!’. 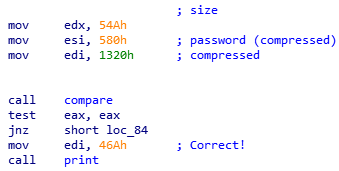 We only have to decompress the password by using the Hoffman decoding algorithm with the correct tree.

The following class represents a node which has two children (left,right) and a value. The member id is the address of node structure in the payload file.

Then the script reads the compressed password and convert it into a bit streams.

I iterate through the bit stream. To find a character corresponding to current bits, we use following simple steps:

The script output the decompressed password result which is a tar archive containing the flag \o/ .