Sometimes, you have to look back in order to understand the things that lie ahead.

A colleague of yours has sent you a program he developed and wants to challenge you.

The program implements a well-known anti-disassembly technique that consists of interleaving specific code and data in the source code so that disassembly analysis tools such as IDA or Ghidra produce an inaccurate set of instructions when they try to disassemble the program. Removing these specific bytes allows us to recover the legitimate control flow and understand how to solve the challenge.

The binary is not stripped so let’s open it in IDA.

The main function is quite simple as it only saves the arguments passed to the program in a g_argv variable of the .bss segment and calls the check_password function. 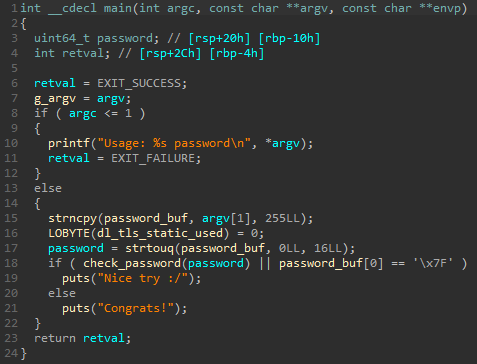 At first glance, this function also seems to be pretty simple: 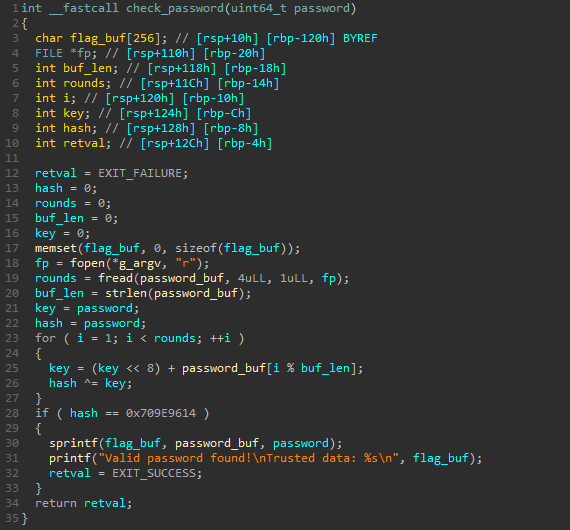 Let’s fire up z3 and see what it takes to find a valid password and get the flag!

Since the program has been statically linked and uses tons of libc functions, I would rather use z3 than angr and focus on the check_password function:

Well that was not expected… If we take another look at the main function, we notice that the password_buf variable is global and is used by the check_password function and the main function for different purposes.

Let’s set a watchpoint to see how the buffer is used throughout the program and see if we can somehow prevent the value '\x7f' from being placed in the buffer.

According to the gdb manual, a watchpoint stops the execution of the program whenever the value of an expression changes. Let’s add one to trace the changes on the value of the first byte of the password_buf.

In order to have a clean output in gdb and to automate our tracing as much as possible, we can use gdb-gef with a command file containing specific configurations to be applied to our debugging session: 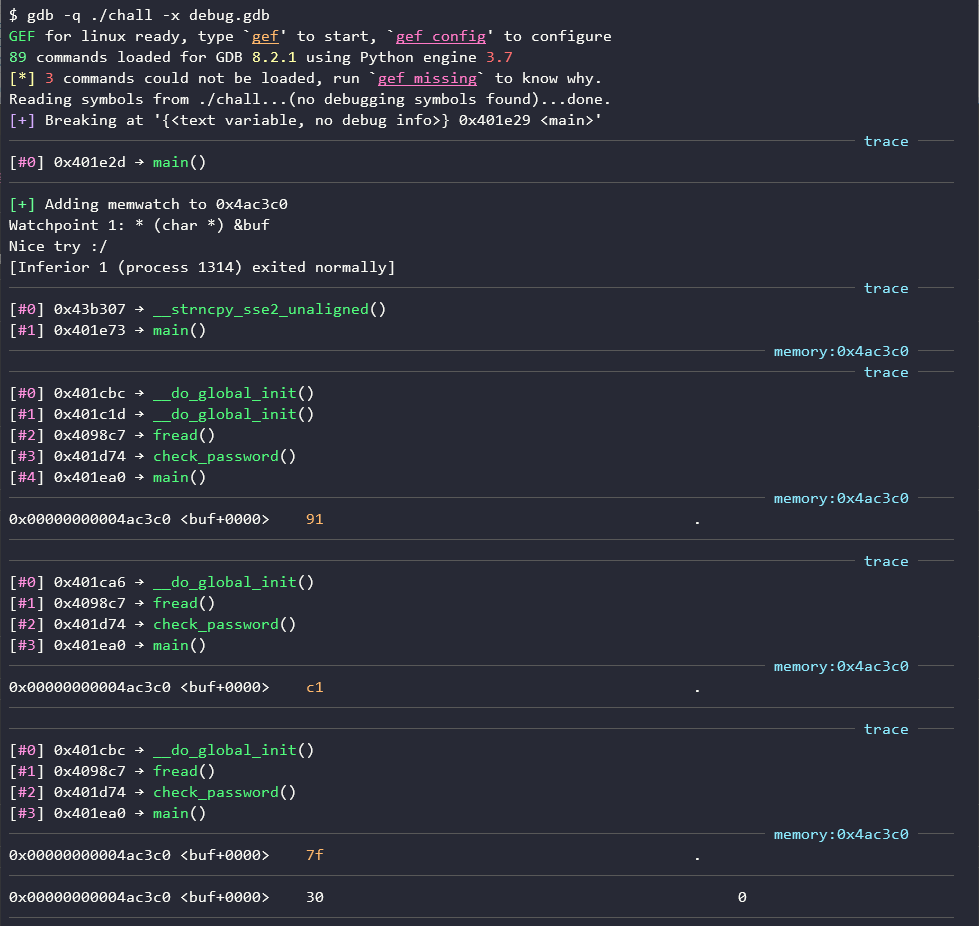 Okay, there seem to be some operations on the first byte of the buffer, let’s break them down:

Well, that’s what it’s supposed to do… Instead, there are recursive calls to a strange __do_global_init function following the call to the fread function which was supposed to call _IO_sgetn function: 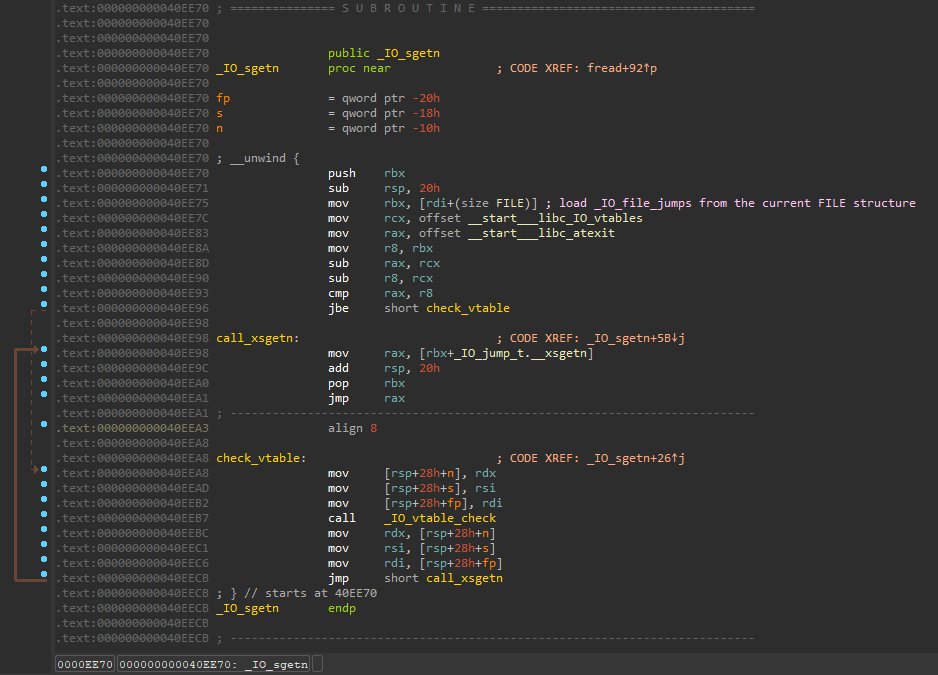 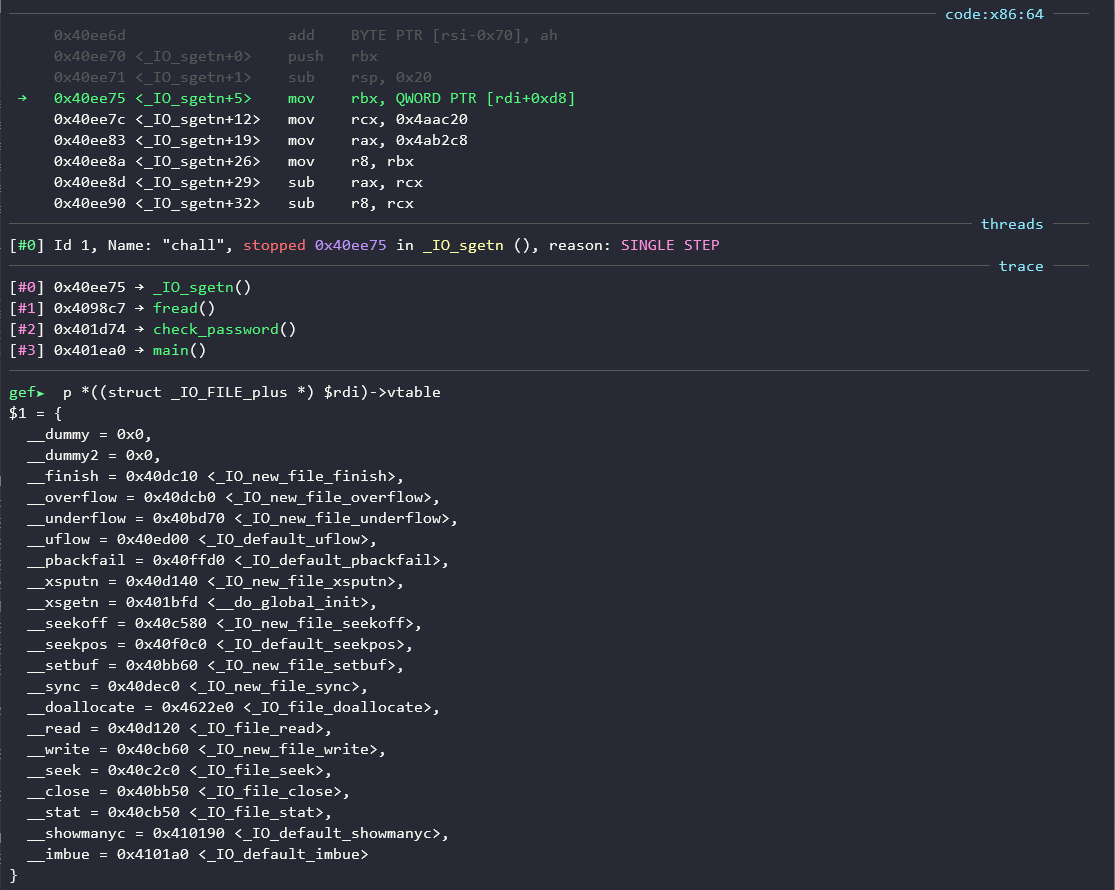 Looking closely at each vtable entry, we notice that the pointer associated with the xsgetn function seems to have been replaced to point to the __do_global_init function, which explains our previous backtraces.

According to the documentation (here), the function xsgetn is the one which is actually in charge of reading n bytes following the call to fread and returns the number of characters actually read. That should be interesting!

When displaying this function in IDA, it seems obvious that there is a problem: 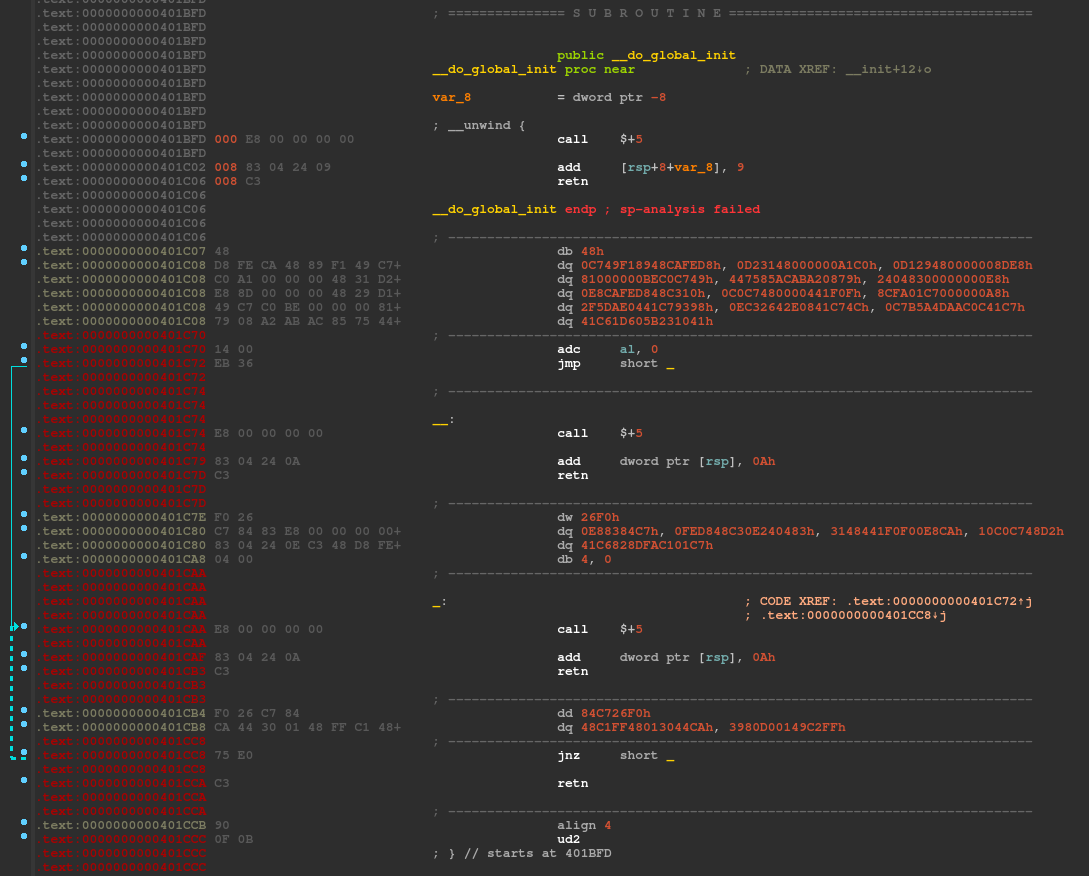 Even if we try to fix the function boundaries (using the p and e shortcuts), the IDA disassembly process doesn’t work properly and shows us both data and code:

There are two common disassembly techniques:

Here, it appears that the challenge author took advantage of the choice of most disassemblers to disassemble the bytes immediately following the call instruction before processing the call target, which can produce conflicting code and trick the disassembler into producing erroneous and inaccurate results if we’re using information to which the disassembler doesn’t have access to, in our case, the return address pointer.

The call instruction pushes a return address pointer on the stack. When the function will be analyzed, the disassembler will prematurely terminate the function because of the “rogue ret” instruction.

Let’s analyze each of these instructions:

To apply the script to the __do_global_init function, we just move our cursor into the function and press the ctrl-< keys.

Here is the simplified result (without nops): 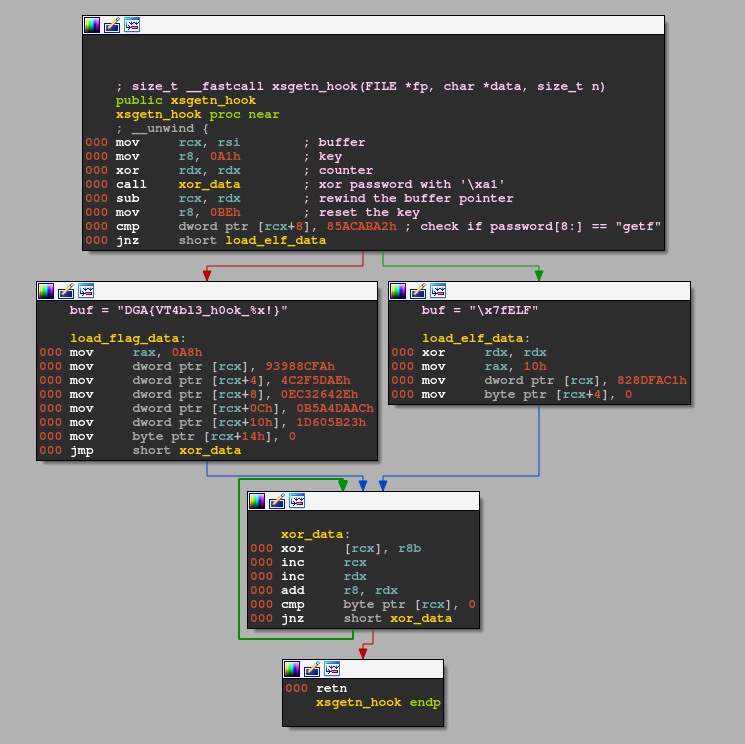 And, here is the corresponding pseudocode: 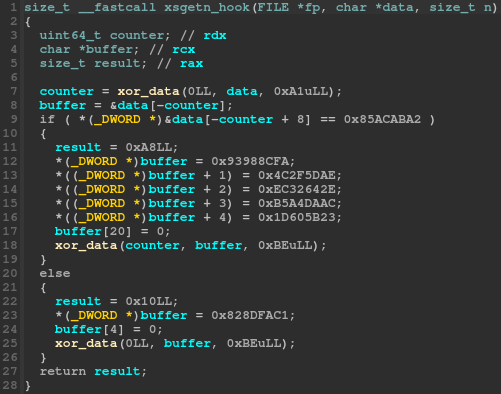 Except for the use of an undocumented calling convention and the combination of calls and jumps to the same code block, this function is pretty simple to understand:

It’s worth noting that the returned size is not the same in both cases:

We can reuse the previous script and change the buffer bytes and rounds count before entering the encryption loop: