By reviewing Norzh Nuclea’s projects, you learn that the engineering team is developing a door locking system whose main goal is safety.

This project is currently used and tested by the secretary for her safe.

Check the reliability of this system based on the project files you got.

The project files contains a compiled chip program for Arduino which is in Intel HEX format.

Using IDA, we’re able to reverse engineer the locking system algorithm and get the password. 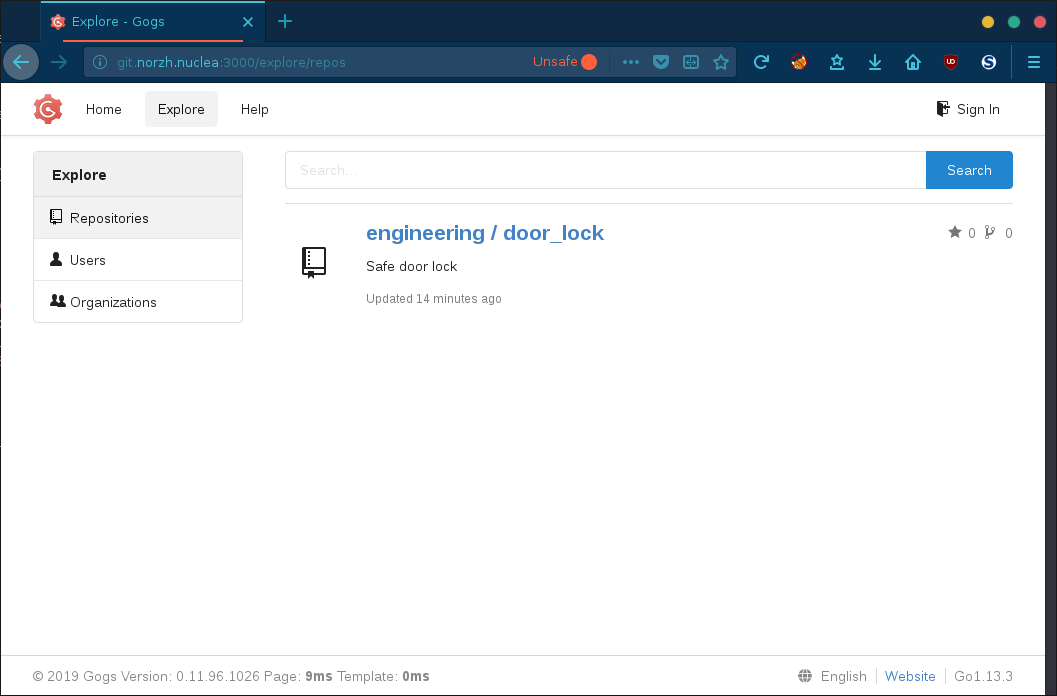 Looking at the issues, we’re informed that the project is based on a sketch file that has been removed and replaced by its compiled version:

Let’s now download the project files and inspect its commits:

The commits log reveals that an Arduino sketch was previously indexed on the repo:

Unfortunately, the sketch file has been removed immediately after its initialization and does not contain sensitive information about the locking system:

Focusing on the last commit, we get the compiled Arduino program encoded in Intel HEX format and a diagram of the circuit.

The following diagram represents the entire circuitry of the door locking system:

By zooming on each element and referring to various datasheets, we’re able to list the electronic components used in this circuit:

According to this circuit design, the Arduino program should be very simple:

Let’s check it out!

Let’s focus on the door_lock.ino.standard.hex file.

Before dropping the binary into IDA, we can decode the program using objcopy. It’s optionnal, but it allows us to analyze the binary before trying to reverse it:

Okay, now we should have a valid program file, let’s check it using binwalk opcode scanner:

The Arduino board is an AVR powered microcontroller, so we can confirm that we work with a valid program. Let’s run IDA!

When launching IDA, we notice that the processor architecture is not detected, IDA can only know the actual processor type if the file format provides it.

Here, we know that our Arduino Uno board is based on the ATmega328 AVR microcontroller, so let’s select Atmel AVR.

After pressing OK, the CPU selection dialog pops up and asks us to choose a CPU corresponding to the actual processor for which the program has been developped.

The problem here is that the ATmega328P is not in the list. As described in the Slot Machine writeup of the Google CTF, you can fix the .data segment if necessary (which is not worth it here), so let’s just select the ATmega32_L, create a RAM section and skip the EEPROM selection dialog box: 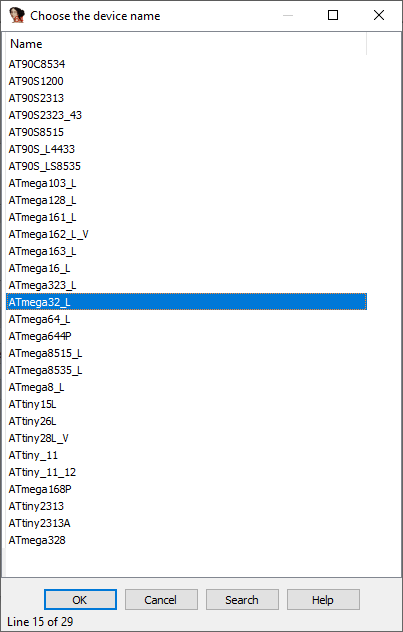 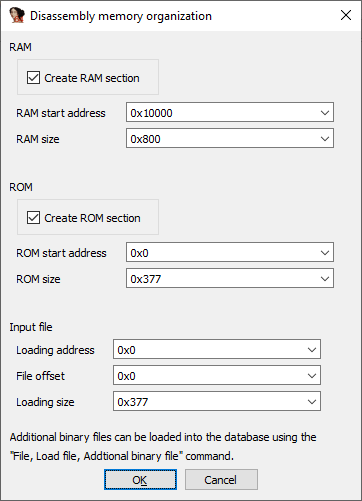 When the Arduino is powered up, it starts program execution from its very first memory address i.e. ROM:0000 which is by default defined as the reset and interrupt vectors: 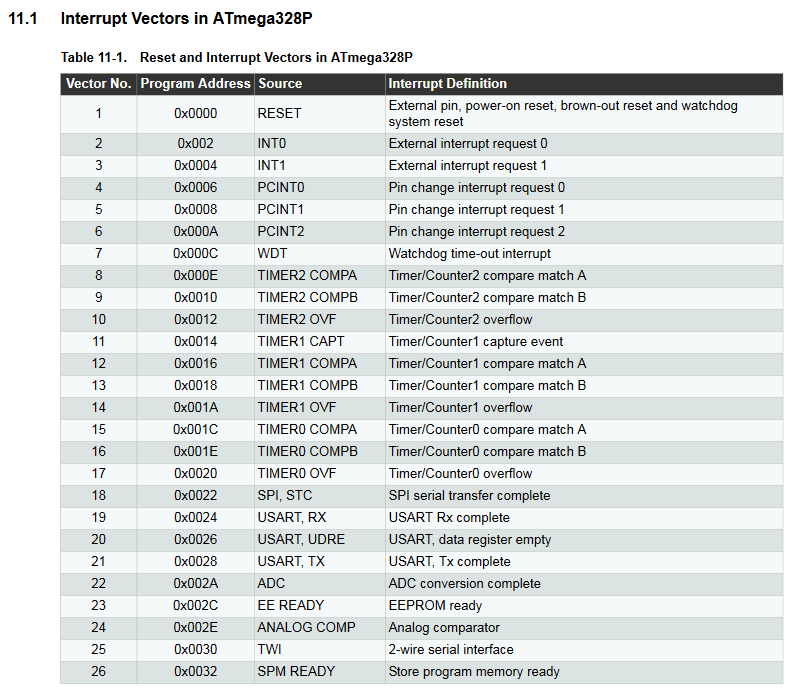 Looking at the RESET vector, we get the address of the reset handler (ROM:0061): 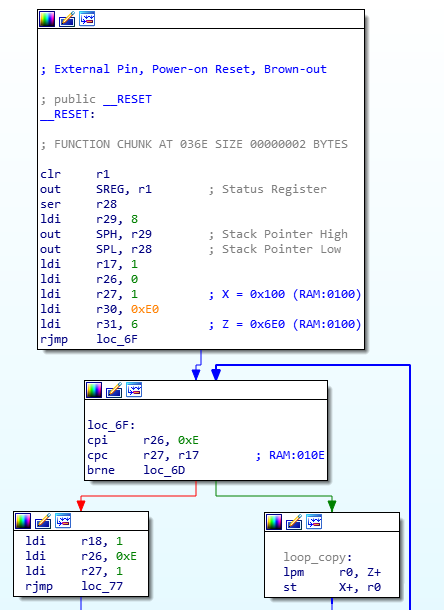 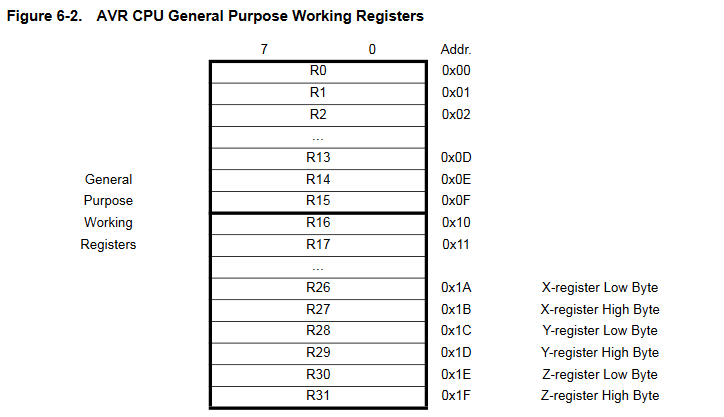 These Indirect Address Registers allow us to store 16-bit values, while standard registers can only contain 8-bit values:

The reset handler gives us interesting values such as the location of the data to be copied into SRAM:

We now know that the SRAM will be initialized with the content in the address range 0x6E0:0x6EE of the ROM. Let’s dump this content:

We can assume it’s the PIN code, but let’s check it out!

Based on the algorithm assumed above, we can expect to find a function with a large loop to read the PIN code on the keypad and a switch statement for the button functions: 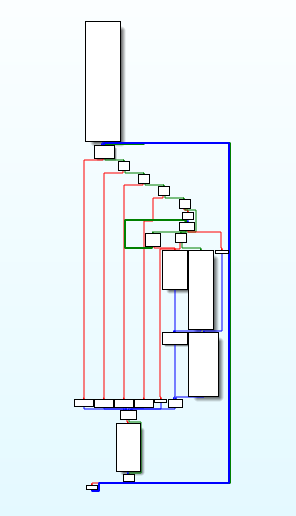 Looking closely at the function graph, we can identify a switch statement that should be the input test for the buttons: 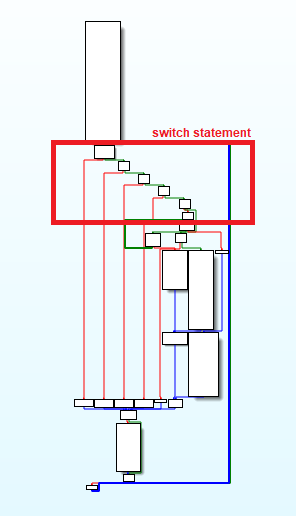 By reversing some code blocks, we finally find the button reads:

And the code associated to each button: 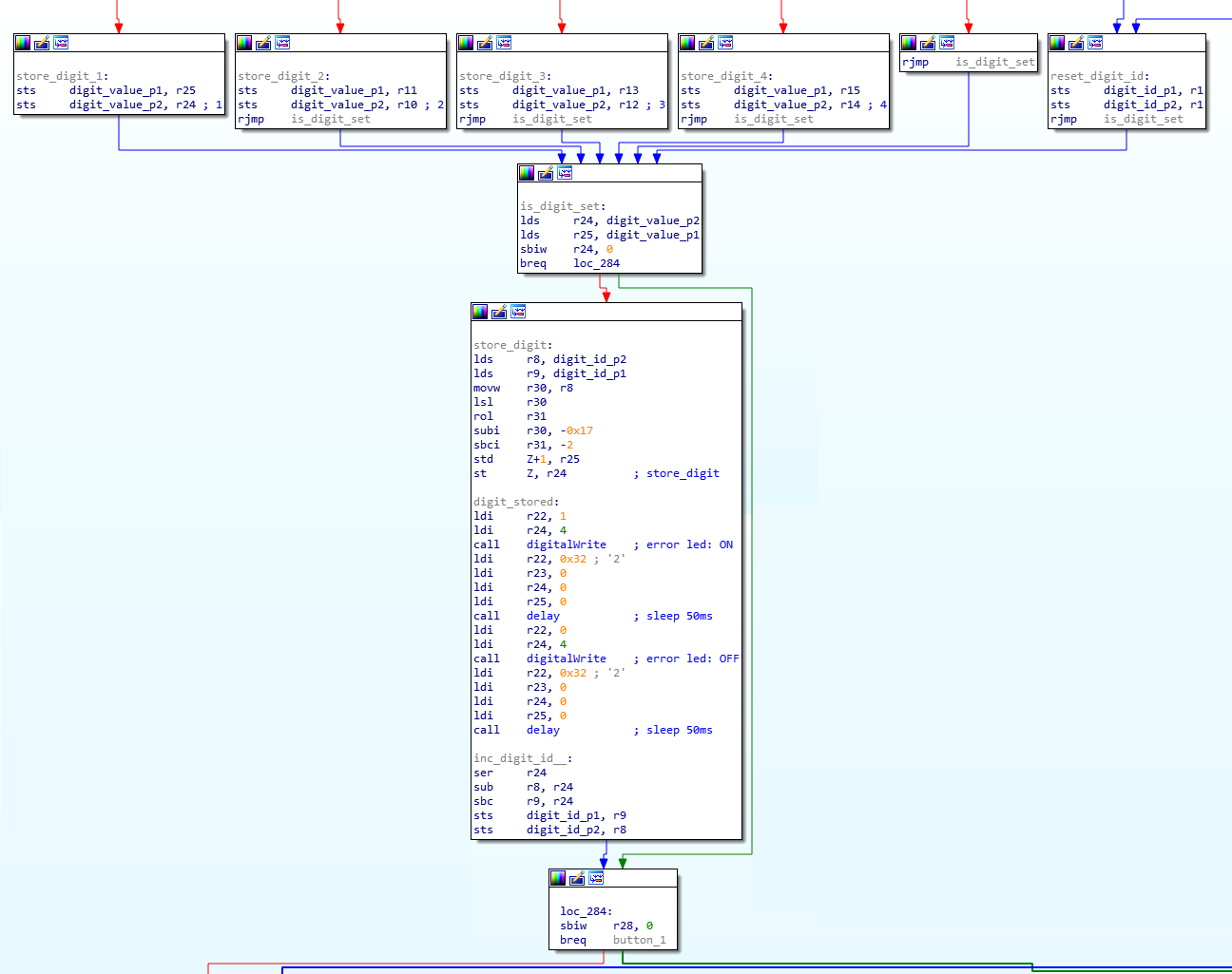 The above code simply stores the button ID using the Z register and increments the PIN code digit index.

Further analysis allows us to get the program’s functions (most of them from the Arduino.h lib): 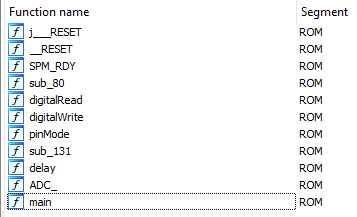 The last two buttons correspond to the Cancel and OK buttons.

The OK button should be associated with a function defined for PIN code validation: 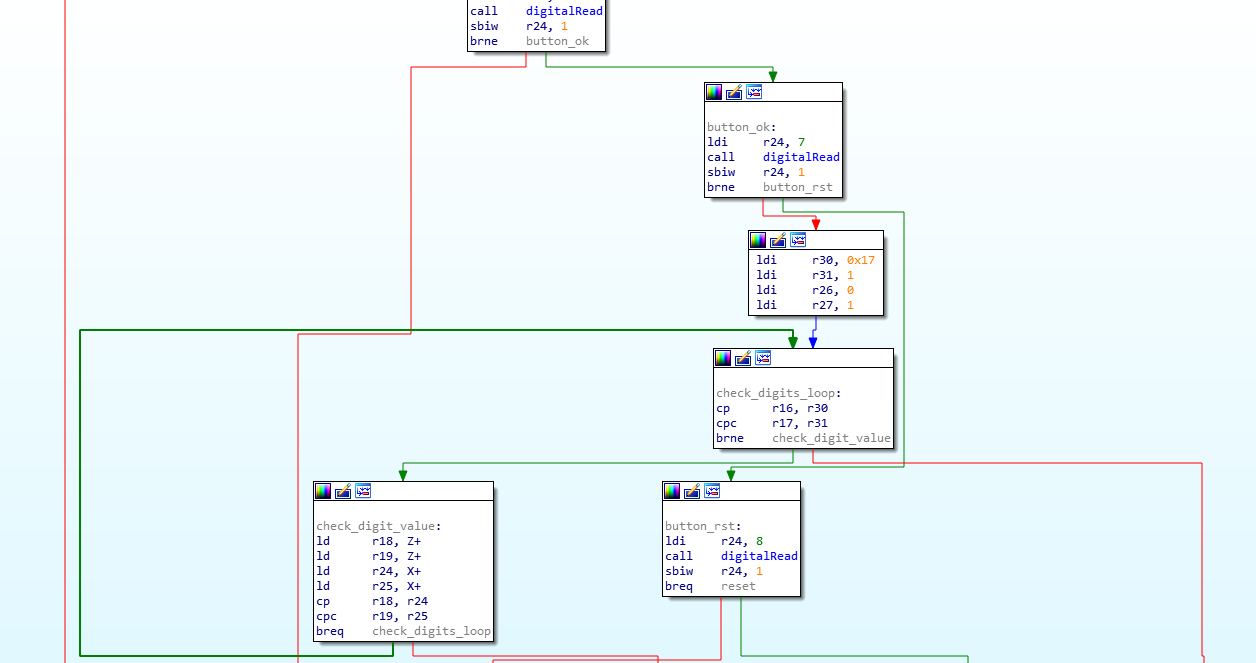 The Z register contains the user PIN code value and the X points to the SRAM section.

Therefore, the SRAM content is definitely the good PIN code!